Congratulations to the Blaske family on their new arrival.
Posted by PartyFit901 at 9:26 AM No comments:

Cass was opening a dresser drawer to get Drew some clothes, and Madi leaned down at the same time and caught the corner of the drawer with her forehead. It wasn't a bad cut but was enough to bleed a little. So, I fixed her up. Maybe it was a little overkill. 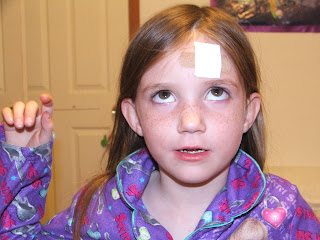 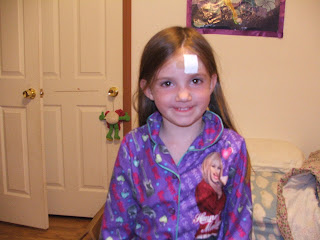 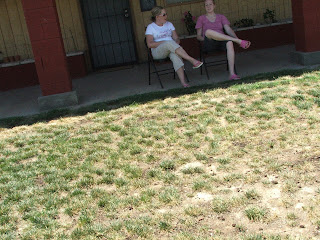 Another birthday for my oldest daughter. 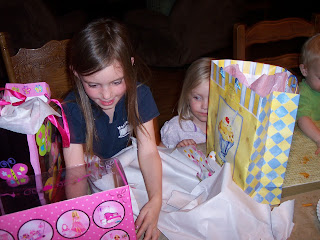 We didn't have a big party for her this year, but we did make something that she had been wanting for a while. 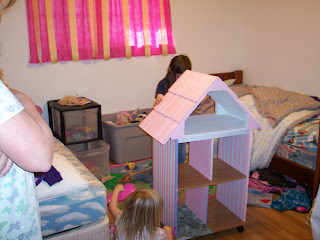 It also only took Drew about ten minutes to begin trying to destroy it. 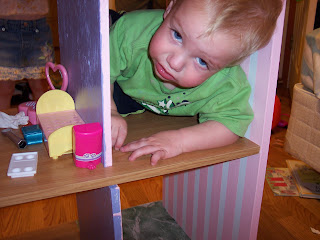 The Chicken or the... Dog

For those of you that don't know the pet situation of the Mobley family, we have 2 small dogs, a medium sized aquarium with some small fish, and a chicken. When Cass first brought the chicken home, Levi made a habit of attacking the chicken. For those actions, he spent some time out of the yard, but he was recently allowed back into the yard allowing the following to transpire.

The chicken begrudgingly eats his scratch, but he would much rather eat the dog food. We occasionally break the dog food into smaller pieces in order to give them to the chicken as a treat. Originally, it was the only way that you could get him to eat out of your hand. So, we've established that the chicken would prefer to eat the dogs' food than his own.

On Friday, I grilled some steaks and the scraps were sent out to Levi after dinner. The chicken decided that he wanted to try a bit and apparently liked it. He and Levi did a little squaking and growling back and forth and came to a draw. After eating the leftovers for lunch on Saturday, the alpha animal status swung into the chicken's favor.

Again, the scraps were sent out side for the dogs. I went to the door and threw the bone into the yard. Levi was the first to reach the bone, but the chicken ran across the yard and leaped at Levi with his claws prepared to make the attack. Levi tucked his tail and ran. A second bone was tossed a little later. With Levi's chance to hold onto his alpha status, he stood his ground as the chicken approached. The chicken walked confidently towards the bone as Levi was holding his head low over the bone growling. The chicken stopped immediately in front of Levi and the bone and slowly leaned down while holding a stare into the dog's eyes. After a couple of intense seconds of staring, the chicken pecked Levi between the eyes and the dog was conquered.

Now the chicken has gained alpha status among the animals. Levi will climb upon a chair, and the chicken will jump up on the chair just to make Levi move. You may be wondering about the other small dog. She has never had any chance to gain alpha status. When she is in the yard, she usually runs to a corner and yelps as the chicken taunts her. We'll have to see whether Levi will make an attempt to topple the chicken from its perch of power.
Posted by PartyFit901 at 2:06 AM No comments: